While talking to water experts the term Urban Stream Syndrome is often mentioned when describing degraded water ways in urban areas. However, like illnesses in humans, the description of the symptoms does not really help address the underlying problem.

I decided to look into what this term really meant and what ways are being explored to try and address this problem.

A technical definition of Urban Stream Syndrome is persistent ecological degradation of streams draining urban land, with symptoms including:

The causes of Urban Stream Syndrome are complex and interactive, but most impacts are caused by a few major sources, primarily urban stormwater runoff delivered to streams by stormwater pipes. Other stressors are sewer overflows, wastewater treatment plant effluents and legacy pollutants (long-lived pollutants from earlier land uses).

Streams are not drains, they provide habitat for many birds, reptiles, amphibians and fish. They are home to a range of macroinvertebrates, which includes arthropods (insects, mites, scuds and crayfish), molluscs (snails, limpets, mussels and clams), annelids (segmented worms), nematodes (roundworms), and platyhelminthes (flatworms). The greater range of macroinvertebrates found in the stream the more diverse is the ecosystem. 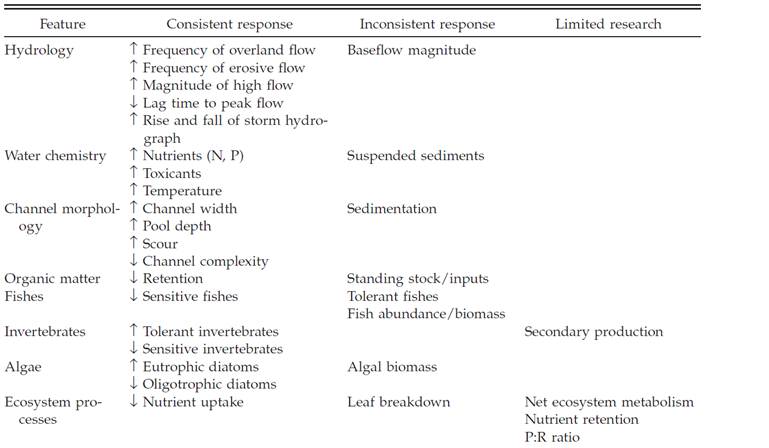 The increased nutrient concentrations in streams impacted by urbanization can promote increased algae.

Sensitive species of macroinvertebrates and fish tend to be absent or less abundant in streams draining urban areas. Globally, streams in urban areas are species-poor consisting mostly of disturbance-tolerant species.

Ecosystem processes are impacted and nutrient uptake can be reduced in more urbanized streams.

What Can We Do?

Water Sensitive Urban Design has been identified as an approach with great potential to achieve ecological improvements in urban streams. Treatment techniques used in WSUD are primarily applied in the catchment, rather than instream and largely involve reducing the amount of water sent into the stormwater system.

When rain falls in natural, undeveloped areas, the water is absorbed and filtered by soil and plants. Stormwater runoff is cleaner and less of a problem in those environments.

WSUD is a design approach used to manage water runoff. Instead of managing and treating stormwater in large, unnatural and costly facilities, WSUD addresses stormwater through small, cost-effective landscape features where the stormwater falls. This approach emphasises conservation and use of on-site natural features to protect water quality. In simple terms, it is a water management method which focuses on sustainability as opposed to disposal.

WSUD principles can be integrated early within a land development process, or be adopted later, such as during a redevelopment of existing dwellings/structures/land (sometimes referred to as a “retrofit”).

By collecting the stormwater produced on your own property, you can ensure that you always have access to water for your garden, lawns, car washing needs or outside property maintenance, irrespective of what Council water restrictions are. This can be particularly helpful in years of drought as you would be able to water your garden as you see fit until the water restrictions lift.

When applied on a broad scale, WSUD principles can restore natural processes and ecological functions. The on-site processes that WSUD practices provide vary depending on the practice, but include runoff volume reduction, and the removal or treatment of contaminates. Once WSUD practices are established, these processes will occur naturally and enhance the existing stormwater management.

There are many ways in which you can reduce the amount of or treat stormwater on your property. What that means is that no matter what your budget is, WSUD methods can be put in place on your land, whether you are developing now or looking at improving an already developed site.

Rainwater harvesting systems collect and store rainwater for future use. Harvested water can be used for a variety of indoor and outdoor uses with minimal treatment (typically irrigation, toilet flushing and the laundry). By using rainwater around the home, you can reduce your annual water bill while also reducing the amount of stormwater runoff entering the Council’s stormwater system. It is a win-win!

Rainwater storage tanks come in a variety of dimensions and shapes to accommodate both the size of your property and the look you prefer. They can fit unobtrusively against your home, be buried underground, or even placed below your deck.

Rain barrels are essentially smaller and less complex rainwater tanks. They are installed at the outlet of downspouts and intercept water draining down roofs. Barrels come in a variety of shapes, sizes and styles and the water collected in barrels are mainly used for the garden.

Rain barrels are great for homeowners who want to collect and store rainwater but have limited space and/or budget. You can make your own rain barrel for little more than the cost of a wheelie bin from your local DIY store.

Greywater treatment systems is a collective term for systems used to collect, treat and reuse water from showers, baths, basins and the laundry (called ‘greywater’). Treated greywater can be reused on the lawn and garden, for toilet flushing and as a cold-water source in the laundry. Greywater treatment can help reduce water bills and, in times of drought and water restrictions, it may be the only source of water to keep your gardens and lawn alive.

On the outside, rain gardens look like a typical garden. However, their function is much greater than a normal garden. The idea behind raingardens is that they will mimic a natural environment, meaning that the water is infiltrated and evaporates or transpires at its source (without having to be disposed of).

Once established, a well-designed rain garden can be maintained with minimal care which is great for busy homeowners.

Permeable pavement typically has a longer life span than traditional asphalt or concrete, making it a financially viable and long-term alternative (particularly where land values are high or flooding is a problem).

Stream daylighting means bringing pipes to the surface by restoring streams to a more natural state. It allows more stormwater to get absorbed and gradually be released by soil and plants. This not only slows and controls stormwater flows but it also helps remove pollutants from the water — meaning that the overall water quality is improved. Naturalised streams offer multiple benefits over pipes, including restored habitats, enhanced stormwater management, and a natural asset for the community to enjoy.

Trees reduce and slow stormwater by intercepting precipitation in their leaves and branches. Many foreign cities have set tree canopy goals to restore some of the benefits of trees that were lost when the areas were developed. Homeowners, businesses, and community groups can all participate in planting and maintaining trees throughout the urban environment, as well as plant trees on their own sections.

Swales or bioswales are planted areas or channels designed to collect and treat polluted stormwater as it moves from one place to another. In contrast to typical pipes and concrete ditches, bioswales are landscaped shallow troughs comprised of natural materials, such as native plants, rocks and soil. Using bioswales around hard surfaces like roads, buildings and parking lots, promotes environmental sustainability while improving the aesthetics of the immediate surroundings.