Red-Red, the diamond-speckled Regent Honeyeater ached for a best friend. He sang and sang but his call echoed unanswered in the open forest. Red-Red had lost contact with the other birds that had been released with him. He was alone in the forest.

He spotted a patch of Yellow Box (Eucalyptus meliodora) waving its wild, tentacle-like flowers heavy with nectar.  Deep in the branches he heard a song and Red-Red sang back. The Little Wattlebird and Red-Red playfully chuckled and chirred but deep down Red-Red knew that this wasn’t his song.

As the Yellow Box produced less and less nectar Red-Red flew on in search of flowering gum trees and Mistletoes. He flew over barren farmlands where the trees had been lost and the Mistletoe had died.  He found gardens with many flowers and snacked on the sweet nectar.  But soon hunger forced him to move on.

Finally he spotted some majestic tall trees and for the first time in many months he felt a tremor of hope.  There high up in the canopy he found another Regent Honeyeater. Red-Red listened to the song but it was very different to his own. Red-Red tried to sing the same song as the other honeyeater. As he sang many birds flew to him but none of them were Regent Honeyeaters.

Red-Red listened and practised the other honeyeater’s song. As the winter neared its end a beautiful bird with a soft warbling sound bobbed her head up and down to him. Red-Red’s was very shy but his heart exploded with joy to finally find a friend. 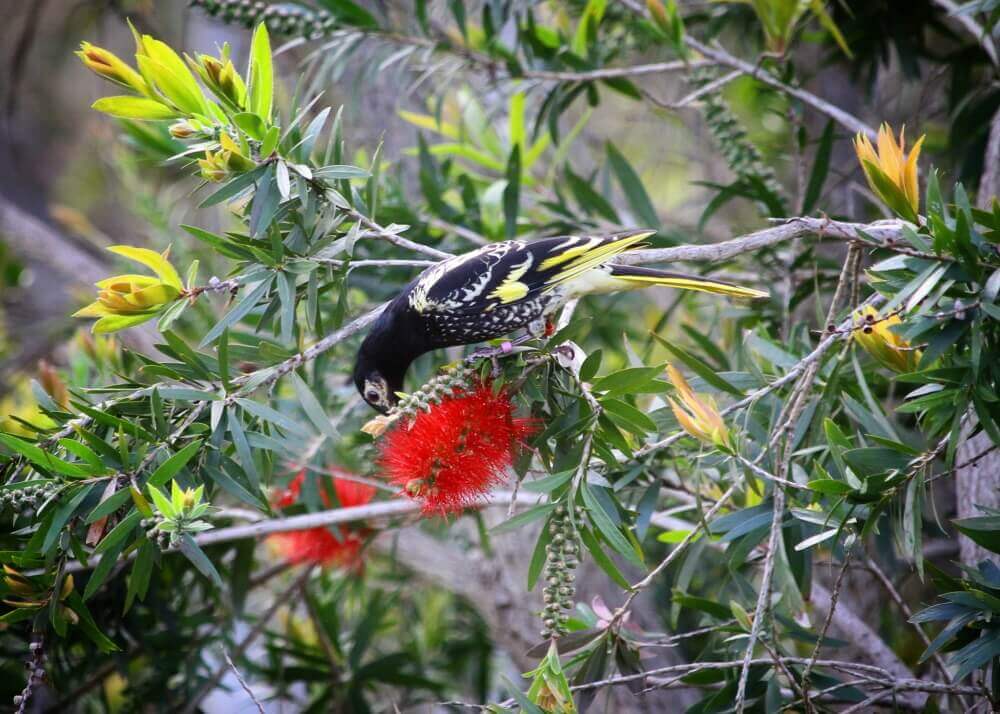 Anna and Red-Red stayed close and Anna began to search for a place to build a nest. High up in the canopy of a Forest Red Gum(Eucalyptus tereticornis) nestled near some flowering mistletoe (Dendrophthoe vitellina)  Anna constructed a strong and snug nest from twigs, fine strips of bark, dry grass and the silk from a nearby spider’s web. Red-Red kept a close look out for attacking ravens, currawongs, butcherbirds and snakes.

When the nest was ready Anna laid two buff-red eggs with small purple-red and violet-gray speckles. For two weeks she nestled on the eggs keeping them warm. Red fed Anna with insects and nectar from the flowering gums. 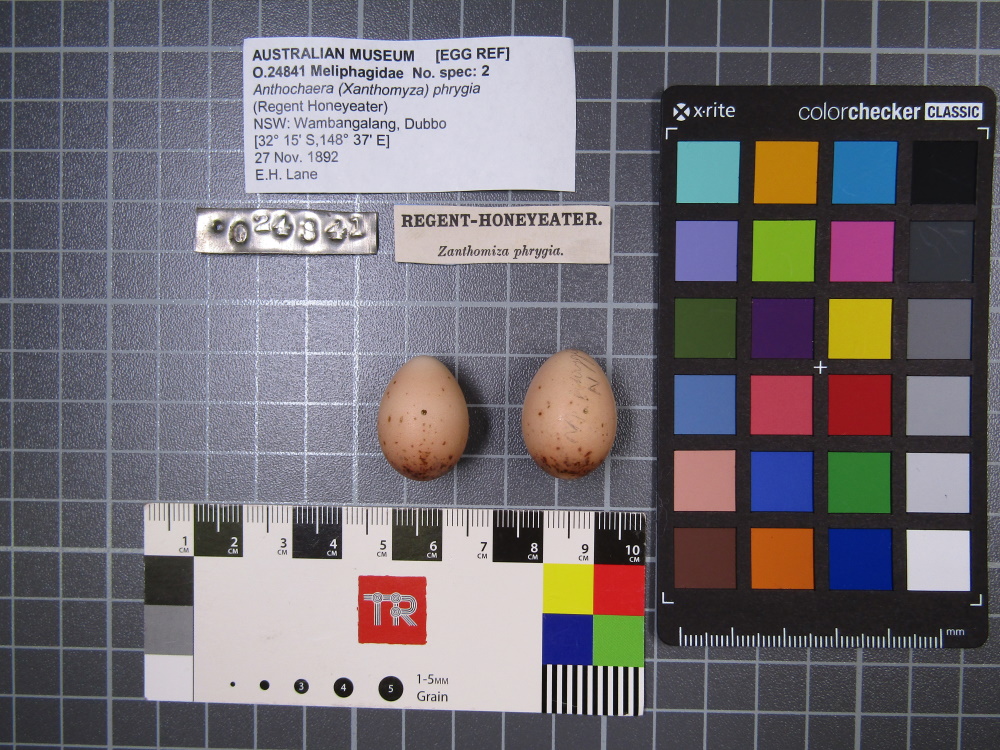 At last a small crack appeared in the eggs and slowly two baby honeyeaters with no feathers emerged. Red and Anna were a family. Red and Anna took turns bringing insects and nectar to feed their hungry chicks.

Red and Anna were fierce protectors. Together they fought off a Pied Currawong, a band of Noisy Miners and a hungry Brushtail Possum. On some days fierce winds threatened to blow their nest out of the canopy.

But the chicks stayed safe and after three weeks they were ready to leave the nest and begin to fly. Red and Anna watched proudly as their fledglings took their first tentative flutters. Very soon they would be among the last 300 Regent Honeyeaters left in the wild.

Regent Honey Eaters are critically endangered which means that they face extinction in 20 or so years. There are many dedicated people trying to save them but they need more resources and more habitat.

You can help by reporting any sightings. Every report of a Regent Honeyeater is extremely valuable and researchers need to hear about them as soon as possible. It is important for them to be able to verify sightings and find out quickly about the conditions where a bird may be (i.e. if others may also be present in a location with lots of flowering).  If possible take a photo.  Even poor quality photos
can help to confirm the age and sex of the bird, identify habitat and bands and try and write down as much information as possible:
• Date & time
• Location
• Habitat
• Trees present
• Leg band colours
• Behaviour
• Other species present

Then let Birdlife know on freecall  1800 621 056, or via email to Dean Ingwersen (e: dean.ingwersen@birdlife.org.au) or Mick Roderick (e: mick.roderick@birdlife.org.au).